“Taste has no boundary,region or cuisine. You just have to pause and rewind and enjoy” 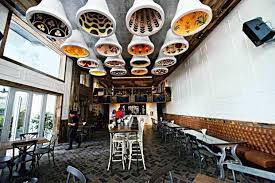 Years is what it took to be back in my old stomping ground, Bangalore City or Bengaluru as it is now called. Seeing what Chefs have been upto on a stove in every city I visit has been my passion. With meagre expectations and a pessimistic view I decided to go where the foodies go. Much to my surprise these food spots had cool names and an Uber following. Having spent most of my cooking life in Auckland, the City of Sails and Melbourne, the melting pot of cuisines, I had set the bar very high. These restaurants had to be Avant -Garde .I needed to jump right in and see what has changed the culinary landscape of this iconic city.

First stop was the Black Rabbit, very chic, organic wood panelled interiors with a rabbit as its logo, must be all hype I thought!! , I must say I was impressed with the inverted Pot light features symmetrically hanging from the high ceiling with a rustic al –fresco .I had the Jack Daniels beef Burger and the bacon and cheese bombs. To find a gourmet burger with the perfect Pattie and the right density bun has always been a struggle for me . But the Black rabbit burger did put a smile on my face. Another silent hero was this awesome Red, “The WOLF TRAP” boekenhouttskloof a gorgeous purple hue with long legs, amazing import from South Africa , takes me to Rhone, great crème friache like smoothness with a  really lovely sweet blueberry  cream flavours, with a somewhat velvety mouth feel to compliment the sensation. It was a great find! 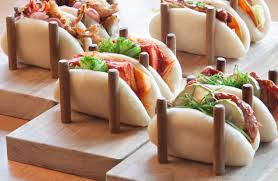 Move a few blocks down the road was the best find of my trip. An interesting name with a smack bang South East Asian looking ambience, The Fatty Bao, I was seated at the terrace and the beautiful ambience felt like listening to Queens Bohemian Rhapsody.  It was eclectic, abstract, simple floors, I loved the vibe.  It felt warm and creative.

I dived into the Bao’s, and the Char Sui and spicy fried fish were a standout. No pretentious food I must add. Simple yet bold combinations, letting the flavours speak for it self. Finally I found dishes that had a point of difference. Pure and simple. Zeroing in on the flavor profiles .Not drown in a sea of fancy words and over seasoned spices .I was thoroughly impressed.

Café Noir gave me great caffeine hit. Top shelve roasted coffee beans with a suave ambience to match .I do feel that barista’s in Bangalore need that extra Je ne sais quoi. But they do pack a punch and on the way to creating a fabulous café coffee culture.

One night in Bangkok made my night with a burnt garlic fried rice and retro music to match. 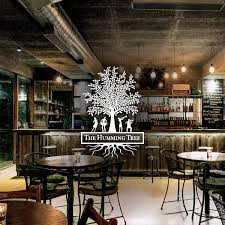 The Humming Tree gave me the two most important things I crave for. Good live music, thanks to Ctrl-Alt-Delete (A must have experience for any music lover) and gourmet food to match .The slow roasted pork and pepperoni jalapeño wood fired pizza was impeccable. These three floors of goodness reminded me of the old Bangalore I knew. Nostalgia was in the air.

Another Jewel   out of suburbia and in the heart of Bangalore City was JW Marriott’sBreakfast offering .A very carefully selected variety, with an indulgent spread made respect the hard work these chefs put it  to  set up an ocean of decadent  treats for the early riser.

On a blistery afternoon I wanted to try a place that had a lot of good being said about it among the foodies in Bangalore .

I got my act together and decided to give Smoke House Deli a go. If you ever wanted an alfresco dinning experience that screams a calm serene ambience, this was it .All white with a great artsy scribble on the walls, made be fall in love with its creative streak .

If you didn’t mind the smokers, the outside seating area is a great place to settle on some brunch options, The truffle and caper egg scramble and the alio olio pepperoncino my favorite, even though I did ask for my choice of pasta to be the classic spaghetti, cant see farfalle work in this dish personally  .But overall a very tastefully written menu  that  summed up the modern Bangalore an.

What I found very special were the unending options I could choose from. A gorgeous looking juice bar with an array of fresh fruits and legumes to choose from .A perfect way to give my aching body a boost .A smorgasbord of cereals, Bircher muesli, dried fruits and nuts, live yoghurt, live cooking stations, live south Indian varietals and if there was anything more “Live” you wanted, Voila, welcome to the live egg station .It was a very Good morning indeed. I did wish for Moo-  “four stomachs” by the end. But Wow!! , This would be the best ever breakfast buffet t I have every seen and tasted

I must add this point as well .I can clearly see how restaurants like this have spawned in the famous Pub City. A well-travelled audience with a knowledgeable foodie Gen Y generation, the crowds want more of a distinctive flavor profile. With the advent of Master chef, the boundaries have been re aligned .The food culture has had reemerged with a selective crowd baying for unique cuisines and masterful presentations. With 350 million youth to boast in India, there is a new audience emerging that wants food to match

With a modern city that always proved ahead of its time. Immigration stands as a key driving force in population growth. Due to its thriving high-tech industry, Bangalore has been attracting migrants both from within and outside of Karnataka state. During the 2007 to 2012 period, an average 186,000 annual net migrants arrived in Bangalore. According to a study published in 2013 by the Centre for Policy Research in New Delhi, 48 percent of migrants to Bangalore are university graduates and post-graduates.

This has created a class of young consumers with high disposable incomes. This growing class is increasingly inclined to global cuisines and styles; namely, Italian, Chinese, Mexican, American (burgers and fast food),modern European, molecular gastronomy,street food re-hashed  and the like. Bangalore has seen a rise in international food and coffee chains in the recent years, too. Also, a wide variety of imported foods and beverages are seen on shelves in retail supermarkets and hypermarkets. With the rise in the upper middle and high income class of Bangaloreans and fast paced work life, spending relaxed evenings and long weekends has increased demand for restaurants and hotels to offer multi- cuisines and serve local, international and exotic foods in a relaxed and peaceful atmosphere.

Overall this was an eye opening food education for me in the old city I grew up in, experiencing new things with the food stepped up a few notches, Bangalore has become the new mecca for any culinary enthusiast.